“You would love the mountain race they have up at Pomona.”

“The course at Pomona would really suit you.”

Ever since my first mountain race back in 2010 I have heard from many people about the legendary 4.5km King of the Mountain race held at Pomona every year on the forth Sunday of July . Unfortunately every year something inevitably came up and I wouldn’t end up entering. With the Kokoda Challenge just two weeks prior to the event the race wasn’t even on my radar until the Thursday the week before the race when, the day after a massage with Craig, I suddenly realised that I was sufficiently recovered to race again. My desperate phone call to the race director, Barry, was met with the news that the race was already full but he would “see what he could do” to find a spot for me to race. By the time I checked my emails the next morning he had already had a runner withdraw and their spot was mine. I was extremely excited to be racing, but after focusing my training on 100km races for over a year now I was also left wondering what I was in for (I mean, running fast hurts!). Luckily my good mate, Josh, was up for a little day trip to the mountain to check out the course that day and to say the least, that trip left me more enthusiastic than ever. I really had no expectations in terms of time or placing but I knew that it was going to be an incredibly fun event!

The Glasshouse Trails Flinders Tour was also on that same Sunday as the King of the Mountain and I had volunteered a while back to help out at that event. I had managed to snare the role of manning the most scenic checkpoint of the race, located at the top of Mt Beerburrum, and spent the morning ticking off and cheering on runners as they reached the hill’s summit. While there I also got a tip from Nic Moloney that many of the runners at Pomona wear gloves to avoid ripping the skin off their hands on the chains that line much of the course. Luckily for me, Mum had her pair of gym gloves in her bag at the time and my hands could just squeeze into them!

When I finally reached Pomona, the atmosphere was very different to most races. The King of the Mountain race is just one of the many attractions of the festival that goes on that weekend and we enjoyed checking the many different stalls and entertainment on offer. The race briefing over at the Lions Den served as a great opportunity to meet some of the legends of race such as 7 time winner Neil Labinsky and fast kiwi Chris Morrissey. It must be one of the very few (probably only) race in Australia that individually announces all 100 competitors and the amount of excitement in the air and amongst the crowed that lined the streets 3 people deep grew as each runner performed their short jog of honour along the town’s main street. When the gun went off I was happy to tuck in beside the far more experienced Neil Labinsky as a few eager runners lead off.

The race starts with a few hundred meters on the road up a slight incline before hitting trail behind the Lions Den and going down a short sharp hill, fondly named “Hecklers’ Hill” after the many “Hecklers” camped out by the side of the trail. It was on this short descent that I moved up into second place, enjoying the only section of downhill before the summit. I then took the lead along the fire trails that gradually works its way up to the base of the main climb.

Hitting the single track that marks the start of the major climb, I could head Chris Morrissey following closely behind. Trying to run as much of the sections where running was physically possible was my main goal, but such segments were few and far between. I had never been required to use chains to haul myself up during a race before but to survive that climb I had to take as much of the load off my screaming quads that I could! I think I glanced back to see Chris’s powerful figure chasing me down 3-4 times during the entire ascent and I could see that I was slowly pulling away. The words of encouragement from those on the course were greatly appreciated but all I could do was huff and puff back at them. I don’t think I’ve ever experienced such an extreme burn in my legs as the final minute of that climb and could definitely tell why the race was referred to as a “mountain challenge”. 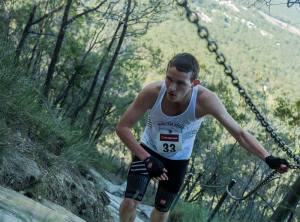 Having conquered the climb it was time for the really fun part to begin! I had been fantasising about descending that mountain at full speed ever since seeing the course and it did not disappoint. Skipping and hoping down rocks and ledges while competitors coming in the other direction cheered was a fantastic feeling but also a tribute to how brilliantly the event is run that I didn’t once have to alter my desired path down the mountain due to their presence (the rule that runners coming down have right of way was followed brilliantly). I could hear officials shouting out that another running was coming downhill not far behind me and having heard stories of Neil Labinsky’s ability to simply “fall” down the mountain, I was half expecting to hear his footsteps behind me soon.

By the time I reached the bottom of the main climb and strode back onto the easy fire trail, my quads were shot! I had been thinking that this was the place to really open up and see how fast I could go but my legs were more fatigued than at the end of 100km race! The lactic from the climb and the pounding from the descent had smashed my quads and I could feel my running form quickly deteriorating. All I could do was grit my teeth and concentrate on turning my legs over as fast as they could go. The short climb up Hecklers Hill was about as much uphill running as I could handle at that stage but by then the loud cheers from the crowd spurred me on. I was trying to listen out for the crowd cheering for Chris/Neil to gauge how far he was behind me, but I couldn’t hear a thing over all the noise coming from those nearest and in front of me (that in itself was a wonderful experience that I hope to relive!). Coming down the final stretch of road I could see that the course record would stand for another year but didn’t slow down as I still had no clue where Chris and Neil were.  The atmosphere along that stretch of road was amazing and the crowd support was like nothing I had ever experienced before. Crossing the line first in 24.22 and realising I could let my legs have the rest that they were screaming for was also a fantastic feeling. Not long after, Chris and then Neil came through the finish line and together we all went to greet the crowd lining the main road while watching all the other amazing runners complete the epic challenge.

This race certainly showed me that I can still run and enjoy shorter races, which I believe is largely due to the speed work that Andy has me do as a part of training for ultras. I can see why people had been telling me to run that race as it is like nothing else I have ever run in before both due to the technical (i.e. fun!) nature of the course and the incredible support of the local crowd. A huge thanks must go to the race director Barry Stewart for organising such a wonderful event and I promise that next time I will try to get my race entry in on time!